The great growth experienced by some (mostly on the coastline) regions of the country creates an imbalance between the North and the South. There are three regions, out of the ten that make up the country, which are the most affected ones, with villages and villages still without electricity or water, with complicated access and whose subsistence is based on the four months of collection that they keep throughout the year as food. The most disadvantaged region of those is the Northeastern (Upper East Region, bordering to the north with Burkina Faso) and within its nine districts, Builsa, which is divided into North and South and it is here where we will focus our activity. 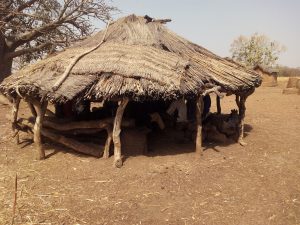 The structure of both access to education and health care still has a long way to go, largely due to the way in which the population is grouped.

The Builsa district is home to 94,000 people approximately, where almost 41% of the population is under the age of fifteen and the 90% of the population lives in rural areas. They are mostly organized in communities (what in Spain would be considered as “villages”) with houses scattered among crops of maize, rice and millet.

Fumbisi, is the capital of the Southern district and Sandema is the one of the Northern’s. Other important communities where one of our local NGO partners is located is Kanjaga, where we will undertake projects with their collaboration and where we have stayed in our two visits to the country.

The Luisa community is also part of the Builsa’s Southern district.